Typewritten notes by Reginald Henry Phillimore attached to the map:

"Copy of a Mughal Map probably made about 1780 from an original that at the time of copying had already been seriously damaged...probable date of the original might therefore be placed between 1650 and 1730."

This map is a schematic of Mughal routes through northern India. It follows the same format at the Chahar Gulshan, with place names captured in rectangles (scaled in relation to importance), and rough mileage indicated with numbers written next to the route.

Phillimore wrote extensive notes on the map, but apparently did not publish them. His typewritten commentary can be accessed at the same Shelfmark number as the map.

Detail View (with some translation): 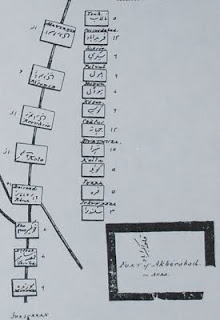 A history of the Fonds Brotier:

An archive staffed by friendly and helpful people. My goal here was to view the original of a series of letters published in the late eighteenth-century in the Philosophical Transactions, and to view the original images that had accompanied one of the letters. It took a bit of work by the picture curator, but she eventually tracked down all the images. I appreciated the opportunity to compare the original letters to the published versions, as well as to compare the original (watercolor) images with the published (engraved) images. Editorial and aesthetic changes introduced by publishing processes are fascinating.

Practicalities: You can bring your camera to save yourself all the on-site transcribing/copying.
Posted by JR at 11:33 AM No comments:

If you're doing research on 18th century India, chances are good you've run across the names of one or two Jesuit priests. They appear in the landscape of southern India with especial frequency, but also toward the north/central region (there was a Jesuit church and college at Agra, for instance). An incredibly curious set of religious folk, the Jesuits took notes on just about everything they saw: language, religion, family, geography, science, trade, travel, etc. We know they were curious, because they wrote letters with unbelievable frequency when they were out on mission, describing the world as they encountered it.

Fortunately, many of the letters written back to Europe from India, China, the Americas and Africa were preserved by the recipient (usually a priest in a higher position). In the eighteenth century, 34 volumes worth of letters were edited and published by the Society of Jesuits under the title Lettres édifiantes et curieuses (you can read a brief summary of the series at Wikipedia, of all places). It takes time to sort out the various editions and publication dates for the volumes, especially if you're trying to do it through interlibrary loan, but I think it's worth it. I've been using the 1781 edition (occasionally reading the 1819 edition for newer punctuation and spellings) because that takes me well beyond the end date for my project (1743).

Unfortunately, even with 34 volumes, the collection doesn't include every letter ever written by every Jesuit priest in the world. That's where the Jesuit Archives in Vanves (Paris) come in handy. I've just started working here, and can I say, this is a really great research experience. Aside from my inability to use the doorbell properly, it's been very painless, even with my abominably poor French (I read it much better than I speak it, obviously). Le Père Archiviste, Robert Bonfils, is friendly and helpful. He speaks perfect English and didn't make me feel stupid for lacking the same fluency with his own language.

Today I looked at two volumes of the Fonds Brotiers, reading letters from various Jesuits interested in astronomy in India and China. These letters nicely fill in the gaps left in the Lettres édifiantes. I think I took the right approach--spent quite a bit of time with the published letters, worked out a timeline and familiarized myself with names and personalities, and then went to the archive. The names I'm reading are all familar to me, and I've read published letters by all of them. This has been surprisingly helpful when I'm trying to decipher complex handwriting.

Practicalities: I had a native French speaker translate my letter of introduction into French for me, but I'm not sure that is necessary. At any rate, you can contact the archivist at:

Contacting Mr. Bonfils ahead of time helped me discover that a citation reproduced a hundred times over in the secondary literature on my subject was incorrect.

Unlike the British Library, this archive permits the use of a camera, useful for taking images of fragile documents.

There are two Citéa hotels within a two-minute walk of the archive. I can say that Citéa Vanves Porte de Châtillon is clean and comfortable (it looks exactly as the website promises), and it takes me 45 seconds to walk from the front door of the hotel to gate of the archive, 4-5 minutes to walk to the grocery store, and 9-10 minutes to walk to the metro. So, convenient, and inexpensive at Euro65/night.
Posted by JR at 10:25 AM 5 comments:

If you are studying in a School of Architecture as I am, you probably have access to a decent Architecture Library. Still, it is worth spending some time over at the RIBA British Architectural Library if you are doing research on Central (West) Asia or Northern India. For instance, if you wanted to read an archaeological report from Аркитектцра СССР at home, you would probably need to go through interlibrary loan to acquire it. At RIBA, you can sit and browse through back issues to your heart's content. Ditto for the even more obscure Аркитектура и Строительство Узбекистана. By the end of my first day there, I had articles from Architecture Australia, Parametro, Perspecta, Aujourd'hui Art et Architecture, Architectural Review, Domus, Bauwelt, and Archaeologia. Some of those are easily available in the U.S., but being able to simply sit and browse the others made the trip to that part of town worth the time.
Posted by JR at 1:15 PM No comments:

If you are completely new to working with Persian manuscripts at the British Library, here are a few tips for the novice. Hopefully it will save you a few steps when you are trying to find a manuscript from a weak citation. Instead of saying to the reference librarian on duty in the Asia and African Studies Reading Room "Uh...I have a number for a Persian manuscript and I don't know to find it," you can instead say, "Uh...I have a number for a Persian manuscript, and it's not in Ethe or Rieu, and I don't know how to find it." [Truthfully, that statement didn't save me a few steps when I was looking for a manuscript with a D.P. shelfmark, but more on that below.]

First, the new version of the British Library website describes its finding aids for Persian manuscripts clearly but briefly. I will just highlight a few of these and tell you how I have found them useful.

Of the basic finding aids for Persian manuscripts, some are aimed specifically at the mss. held in the British Library, while some attempt to address every Persian manuscript known to humankind. Of the general catalogues, the one you will probably want to start with is C. A. Storey's Persian literature: A Bio-bibliographical Study. Storey's volumes break down as follows (the volume/fascicle numbers change depending on how it is catalogued/which edition you're using):

I started using the Storey volume on astronomical manuscripts first, but obviously, for historians of India, the volume that contains the History of India is crucial. Also obviously, the volumes are somewhat out of date, even though you'll find plenty to keep you busy. Ghulām Ḥusayn Tasbīḥī wrote a doctoral thesis at the University of London on the problem of updating the volumes, so if you're wondering what you're missing, and why you're missing it, you can read "The Problems of Bringing Storey’s Persian Literature Up to Date (Persian Lexicography)."

Exclusively tuned to the Mughal Empire is D. N. Marshall's Mughals in India: a Bibliographical Survey of Manuscripts. This is good addition to Storey. One difficulty with this index (for me) is that the manuscripts are listed alphabetically according to author--if you know the name of a manuscript, but not the author, you have to do a bit of work to find the description.

If you're working on a science-related topic like me (astronomy), you might want to sit down with A. Rahman's Science and technology in medieval India : a bibliography of source materials in Sanskrit, Arabic and Persian (New Delhi : Indian National Science Academy, 1982). This is a great source, as it lets you sift through Persian, Sanskrit and Arabic science manuscripts simultaneoulsy. I should warn you, the abbreviation "I.O." does not stand for "India Office" in this volume. One strong aspect of this catalogue is the attention given to manuscripts held in collections in India--"I.O." refers to one of these, so if you try to order up a ms. numbered, say, "I.O. 4566," it won't work at the British Library (this I know from personal experience).

I won't give advice on how to order up I.O. or B.M. manuscripts using the British Library's Integrated Catalogue (online). Generally, you just use the numeric digits, but the process is impossible to describe in text. Ask the reference librarian for help--they can input the citation properly (even they sometimes have to try twice or thrice to get the right string of letters and numbers), then order up the manuscript for you by proxy. They do this all the time, so go ahead and ask for help.

Finally, since I am providing sources for historians of India, I should also mention Elliot and Dowson's The History of India: the Muhammadan Period, as Told by Its Own Historians (31 vols.), even though it is not really a catalogue. This is a very large collection of manuscript descriptions and translations of ms. excerpts into English. You can often read a short extract in The History of India, cross-reference it with Rieu or Ethe shelfmarks, and come up with the original Persian manuscripts 70 minutes later.

Oh, I promised to discuss the trouble-making "D. P." shelfmark. Storey cited a manuscript held in the India Office as "D. P. 627," noting that Ethe had not included it in his catalogue. I asked for assistance from two different reference librarians, but neither one could figure out the shelfmark. Finally, I was able to contact one of the curators of Persian manuscripts, and she told me that it was "Delhi Persian" papers. When I finally managed to get my hands on this manuscript, the staff at the Deliveries desk were mystified--apparently they only infreqently (never?) see the D. P. shelfmark. Storey described these papers in a separate listing, apparently not published. I'll let you know more about it later, as the curator is going to let me read Storey's description of D. P. 627 Thursday.

JR
Director of Communications. Finally settled in the far right corner of the country with one significant other and four significant cats.