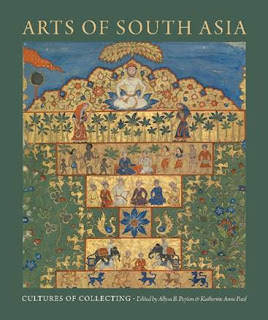 Why this book excites me:

Arts of South Asia offers "a collective approach to previously unrecorded histories about how the arts of South Asia were sourced for external appreciation and about a variety of economic, political, and social forces that enabled 'collecting.'" [p1]  While I'm mostly interested in the sections exploring artworks that have been "kidnapped" (authors' word), the book also deals with art that has been produced for "translocal consumers," with local and possibly global circulation in mind.

I'm also intrigued by the chapter on Coomaraswamy, for obvious reasons, but also because he played such a large role in shaping the Indian painting collection at the Boston MFA.

Chapter One: “Relating to a Country So Distant”: Collecting South Asian Arms and Armor at the Tower of London during the Nineteenth Century (Natasha Bennett)

Appendix C. Selected Histories of Global Collecting
Posted by JR at 10:07 AM No comments:

Last December AIIS received a grant to hold a three-day Museum and Heritage Conservation Summit meant to "bring together museum professionals in India including curators, administrators and conservationists, as well as some alumni of the Art Conservationist Fellowships, [so they can] engage with each other and American counterparts on important aspects of running museums and other heritage institutions in the twenty-first century, and . . . share best practices and develop creative, innovative, and sustainable programs." At the end of the summit, a white paper on advancing India's museums will be drafted for the Ministry of Culture, Government of India,

I recently received an announcement indicating that the summit will take place on July 22, 23, and 24, 2019 at the India International Centre, New Delhi.

JR
Communications Manager. Finally settled in the far right corner of the country with one significant other and four significant cats.